Welcome back Indy Reds. Since LFC and the EPL are on International Break here is a new Indy Red Fan Focus to hold you over until the match next Saturday v Villa. Up this week is Zach, I’m sure you have seen him out at the Indy Eleven matches and on twitter. 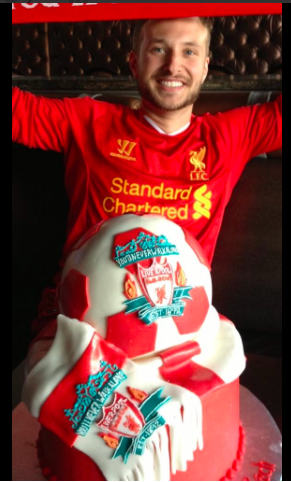 How did you pick Liverpool as your team?  Played with them on old console gaming systems and stuck with them.  Truly found my love for the club when I studied abroad in London, England in 2006; right before they won the FA Cup.  Liverpudlians cannot be matched when it comes to passion and love for their club.

First LFC memory?  My first true memory came when I watched the FA Cup win in 2001 when Owen scored twice to help LFC in their comeback win.

Favorite LFC memory?  Easy, Instanbul.  However, to change it up a bit, Gerrard’s beautiful, curling, last-minute winner against Villa in 2007 really has stuck with me.

Do you have any superstitions or traditions you do/have for each match?  I used to eat an entire box of twinkies before each match (which I have a pretty good record with) but my health suffers greatly when I do, so I’m currently looking for another.  I always wear the same shirt as the players do for each match.

Where were you during Istanbul?  I was in a lounge at college watching with a small group of other friends.

Favorite Current Player and Why?  Gerrard is my football hero.  He is the definition of legend and leader.  His loyalty to the club and passion for the game is unmatched.

If you could meet or have dinner with any LFC player/manager ever who it would it be & why?  Without question, Steven Gerrard.  Everyone wants to meet their hero.

Favorite LFC kit ever? I would have to say the 2008/09 home kit.  Just had a clean look about it that screamed champion.  We were close that year!

You are Owner of Liverpool for 1 day what do you do?  This is a tough question.  From a business stand point, the right people are in place to manage the club so I wouldn’t make any changes there.  This is a weird, off-the-wall “want” but hey if I can make it happen, awesome.   I would attach a building next to Anfield via a skybridge with luxury condos.  I always thought that would be really cool to fulfill the dream for those who want to “live” at Anfield.

LFC have just won the league, where are you going for a celebration dinner in Indy Area?  I’m going where the party’s at.  Indy Anfield, Union Jack Pub.

Favorite LFC Goal?  It’s between the Gerrard winner against Villa and Gerrard’s goal to get things going in Instanbul.

Have you ever seen LFC play in person?  Saw them for the first time in Chicago in July.

What other sports do you follow or hobbies do you have?  I love the Pacers.  I “grew up” spending lots of time at Market Square Arena and what was then Conseco Fieldhouse.  My dad worked for the Pacers and so I would spend many days during the summers or when I times when I was sick there with him.  I also love weather and astronomy.  I’m a bit of a nerd when it comes to that.  I also mix trance music on rare occasion.  Not the best by any means but I have fun!

What makes you most proud to support LFC?  There is no other “fanbase” as loving of their club as LFC supporters are.  The passion, the “we will never quit” attitude of the players.  I’m always proud to wear my red shirt.

Best thing about being  an Indy Red? Thankful we finally are getting this official!!

Well after that 3-0 thrashing we have Spurs it is an early season International Break.
The big news is Daniel Sturridge picked up a thigh injury in training. Looks like he could be out for a couple weeks. Major bummer, but now is the time for Lambert/Borini/Markovic/Coutinho to step it up and help out on the score sheet.

Even though the transfer window is over(what a window it was, very successful window) LFC are closing in on completing the signing of free transfer of former Barcelona keeper Victor Valdes.

Thoughts on this simple T-shirt idea? 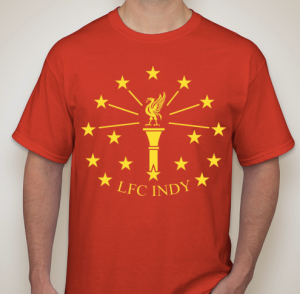 Would be about $10 a shirt. Could do either just the front or have the front and the back.
Willing to pre-order/pre-pay for them? If you have any design ideas get on Customink.com and post them to the twitter or Facebook page.